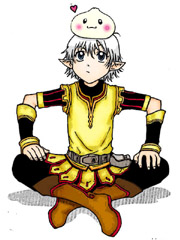 Prince and Meatbun
"I firmly believe that who you are now is the true you, just as the person I am right now is the true me. Everything else is of no importance — be it gender, appearance, or even the facades we assume in real life...none of those are important."
— Guiliastes
Advertisement:

Half Prince (½王子) is a series of novels written by Taiwanese author Yu Wo. The popularity of the novels lead to a manhua drawn by Choi Hong Chong in a very manga art-style.

The story is set primarily about 100 years in the future, in a super-realistic full-immersion fantasy role-playing-game. The protagonist is a girl named Feng Lan who makes a bet with her brother Feng Yang Ming to make it all the way through the game without a single use of her feminine assets. How, you ask, will she accomplish this? Why, with help from the fine tradition of playing video-games as an awesomely attractive member of the opposite sex, of course!

Feng Lan plays as the bloodthirsty elfin warrior "Prince", who just happens to be one of the most Bishōnen beings ever witnessed. He soon acquires a large Unwanted Harem of both male and female admirers, a strange pet shaped like a meat bun, and a group of True Companions. A surprising number of characters love him/her in a gender-confused way, and those who don't are pulled towards his honest and admirable personality (or to his unique and bloody skills on the battlefield).

Translations for the novel can be found HERE

. They have the Yu Wo's blessing. Scanlations for the manhua can be found HERE

. They have the blessing of the artist.

Compare with Yureka. Also see Eclipse Hunter and The Legend of Sun Knight, two other novel series by the same author.

These novels provides examples of