"How could you say things like that? You don't even know me..."
— Ventus 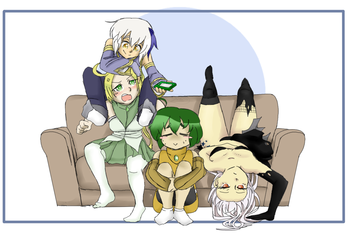 A class of four
Grasp of Ventus

is an ongoing Web Original Fiction created by Mystee or Leila Ranker. The book is hosted currently on two sites, one being Figment

and the other being Wattpad

. The story is set within an alternate Earth in the year 2015. On this Earth, magic and spells have always existed and been used for even the most daily of chores, but currently, this is dying out and the wielders of magic, the elementalists, have become scarce to come by. The story focuses on a group of students from a small town, each one an elementalist, who have been hired by the queen to stop a terroristic action threatened by a dark magic elementalist from a foreign country.
Advertisement:

The story will occasionally make use of Switching P.O.V. While it is most often using the point of view of the main character, Ventus, it will switch to the other characters when he can not give story relevant information I.E is not in/near an important event.

Each of the main characters hold a different secret that will be stressed upon at one point or another in the story to try and make them appear more realistic, and each has their own use as well to try and make sure each character doesn't end up as being useless

Grasp of Ventus contains examples of: