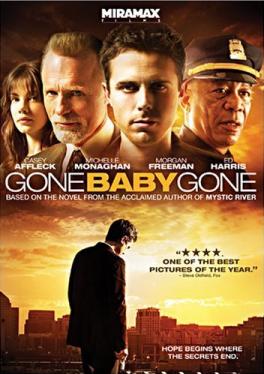 "You got my money, you leave that shit in the mailbox on your ass way out, you feel me? Some other motherfuckers let fool rob on them. I don't play scrimmage. But I don't fuck with no kids. And if that girl's only hope is you, well, I pray for her, because she's gone, baby. Gone."
— Cheese
Advertisement:

A 1998 Kenzie and Gennaro series novel by Dennis Lehane, author of Mystic River and The Given Day, Gone Baby Gone was brought to the screen in 2007 by Ben Affleck in his directorial debut.

In Boston, private investigators and lovers Patrick Kenzie and Angie Gennaro are called to investigate the disappearance of 4-year-old Amanda McCready. With the aid of police Capt. Jack Doyle, father of a murdered daughter himself, the two set out on the case they initially never wanted. As they further investigate, secrets are dug up that threaten all involved.

The book and movie feature examples of: