Literature / Goldilocks
aka: Goldilocks And The Three Bears 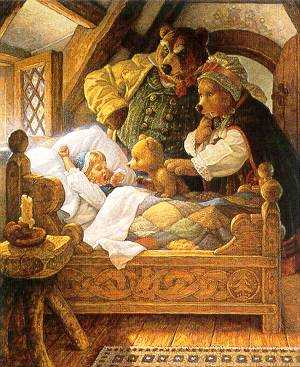 Not as creepy as the burger king, but still...
A classic folktale.
Advertisement:

Once Upon a Time, there was a little girl called Goldilocks whose hair was the color of gold. One day, she took a walk in the woods and came to a house where three bears lived - a papa bear, a mama bear and a baby bear. The bears weren't home, but they'd left their door unlocked, and so Goldilocks came in.

Then the bears came home. They saw the evidence of the break-in, the eating of porridge, the sitting in chairs, the sleeping in beds. Goldilocks didn't wake up until they got there, so you can guess how it ends.

Like many Fairy Tales, this one has evolved over the years. According to that other wiki

, the original tale was probably that of Scrapefoot the vixen (as in a fox), who was an unwelcome guest at the bears' castle (yes, you read right. Castle). Robert Southey apparently heard this tale from an uncle and was the first to publish it. However, he accidentally thought it was the wrong kind of vixen, which got her changed into a mean old woman who, after not being invited around to the bears' place, decides to go check it out for herself. She falls out the window and is never seen again. Goldilocks as we know her only turns up in Joseph Cundall's version 12 years later and only to stop confusion with other old ladies in other fairy tales. Nor was she the only little girl; for a long time, she was dubbed Silverhair (and George MacDonald did a Shout-Out to the tale in The Golden Key by that title).

, with a link to many variants of it.

As with other fairy tales, we have seen Goldie and the bears get fractured until they are shattered. Notable adaptations include Bugs Bunny and the Three Bears and the Terrytoons version, the latter of which is notable for making the bears Italian, replacing the porridge with spaghetti, and giving us "SOMEBODY TOUCHA MY SPAGHETT!". We've also seen her get added to the lineup of the Dark Parables, which makes her not only an adult, but an Action Girl, and a supporting villain in Fables where she's a terrorist for hire.note And a bearfucker There's also Goldie & Bear, which takes place after the story, and depicts them as friends.