Literature / Get in the Van 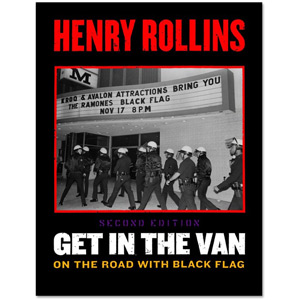 This Band Could Be Your Life!
Advertisement:

Get in the Van is the recollections and journals of Henry Rollins' time in the seminal hardcore punk band Black Flag from 1981 to 1986. Starting off with his memories from a decade later of the early years (before he kept a journal), the book then switches to journal entries from his days on the road on tour, from backstage at shows, in various crash houses with fans who put the band up, in the titular van, and some from "The Shed", a literal tool / garden shed he lived in in the backyard of guitarist Greg Ginn's parent's house.

The book presents a stark and harsh look at the life of a DIY punk band of the time. He describes money as always low, never knowing where the next meal is coming from or where they are going to sleep that night. The police are always hassling them, "fans" are always wanting to pick fights, not to mention run-ins with the various neo-Nazi skinheads who were prevalent at punk shows at the time. Additionally, Henry's own battle with depression is prevalent in many entries.

It's not all a downer though. In between, there are funny stories and anecdotes, and a great POV on the recording of Black Flag's most famous album Damaged. There are many rare pictures of the band performing, of Rollins and his various looks throughout those years, plus band fliers and artwork.

The book is often hailed as one of the best documentations of the hardcore punk scene of that era, and additionally there is an audio version (somewhat condensed) which Henry reads himself.

Get in the Van contains examples of the following tropes: