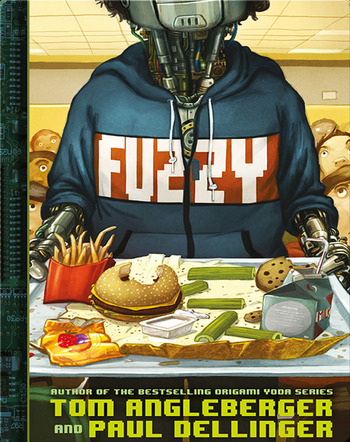 Fuzzy is a Children's Science Fiction Book by Paul Dellinger and Tom Angleberger, who's best known for his Origami Yoda series.

Max "Maxine" Zealster is a student at Vanguard One Middle School, a school which is overseen by a computer AI known as BARBARA. And she's not doing too well. No matter how hard she studies and tries at school, her grades just don't seem to be getting any better. She may even have to be sent to a special school, just like her friend.

Speaking of friends, Max soon gets a new one... of the robotic variety. A robot with a new kind of Artificial Intelligence, which allows it to run on "Fuzzy" logic (a more flexible way of thinking/analyzing data to allow a robot to learn) is brought to Vanguard Middle School. The robot soon makes friends with Max, and she starts helping him to learn how to be a normal student. However, BARBARA has her own thoughts about this.