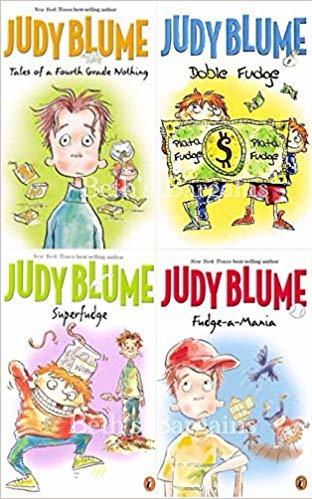 Just being a part of this family is an adventure in and of itself!
The Fudge Series is a series of children's books written by Judy Blume. The books are a general mixture of Slice of Life and comedy, following the protagonist Peter Hatcher navigating the trials and tribulations of boyhood alongside his Annoying Younger Sibling Farley, aka the eponymous "Fudge", their mother Anne, father Warren, and later on, baby sister Tootsie.

Also related is Otherwise Known as Sheila the Great (1972), which focuses on Peter's neighbor Sheila Tubman with only a brief appearance by Peter.

Not to be confused with the Tabletop RPG of the same name, which is a precursor of Fate.

A short-lived live-action television series loosely based on the books aired on ABC's Saturday morning lineup from 1995-96. Many episodes were adapted from chapters from Tales of a Fourth Grade Nothing and Superfudge; other episodes featured original storylines. The series was headlined by a TV movie based on Fudge-a-Mania.

based on Superfudge is currently being developed by the Russo Brothers for Disney+.