Literature / From the New World 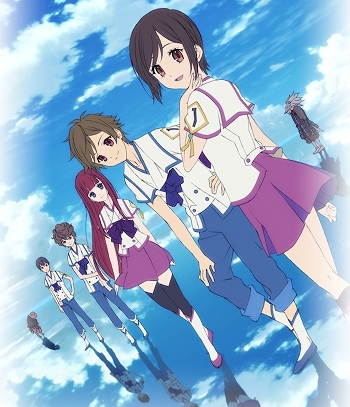 In which of these characters lies the power to destroy the world? All of them.
Advertisement:

A millennium from now, in Japan, there exists a utopia. Saki Watanabe lives in an idyllic village barred from the outside world. Her world is ruled by the people who possess the "gods' power" of psychokinesis. After finally obtaining her own powers, Saki enters the Zenjin Academy to train along with five other children: Satoru Asahina, Maria Akizuki, Mamoru Itou, Shun Aonuma, and Reiko Amano.

Not all is as it seems, however. In this utopian village, strange rumors about a monstrous cat that abducts children circulate, and students are said to disappear from the academy. The world and its history are much darker than they appear and humanity is on the verge of collapse.

From the New World (新世界より Shin Sekai Yori) is a Japanese science fiction novel by Yūsuke Kishi. It was adapted into a 25-episode anime television series by A-1 Pictures that aired from September 2012 to March 2013. The anime has been picked up for streaming

and home video release in North America by Sentai Filmworks, and is available on Crunchyroll

as well. There is also a manga adaptation that was serialized in Kodansha's "Bessatsu Shounen Magazine" from May 2012 until June 2014 and is now licensed by Vertical. The manga differs considerably from both the anime and the original novel in plot and characterization.

It is unknown if/when the original novel will be officially translated. Meanwhile, an English fan-translation (completed in 2016) can be found here

The book/anime provides examples of: