Literature / From Here to Eternity 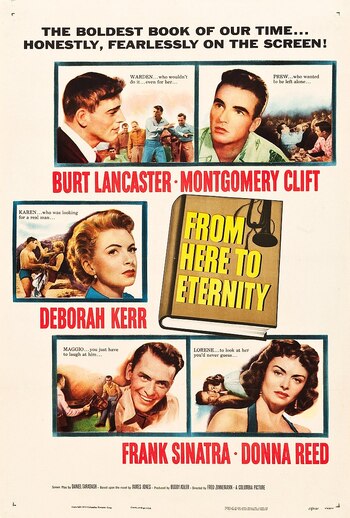 "Well, what am I? I'm a private no-class dogface. The way most civilians look at that, that's two steps up from nothin'."
— Robert E. Lee "Prew" Prewitt
Advertisement:

From Here to Eternity is a 1952 novel by James Jones, based on his experiences serving in World War II. It was adapted into a feature film in 1953, a miniseries in 1979, a TV series in 1980, and a short-lived stage musical in 2013. The film version, directed by Fred Zinnemann and with an All-Star Cast that includes Burt Lancaster, Deborah Kerr, Montgomery Clift, Frank Sinatra, Donna Reed, and Ernest Borgnine, remains the most iconic of these productions. It won eight Academy Awards out of thirteen nominations, including Best Picture, Best Director (Zinnemann), Best Supporting Actor (Sinatra), Best Supporting Actress (Reed), and Best Adapted Screenplay (Daniel Taradash). The 1979 miniseries starred Natalie Wood, Steve Railsback, William Devane, and Kim Basinger.

The 1953 film is also famous for a certain scene involving Lancaster, Kerr, and a beach. It's an iconic (and oft-parodied) bit, and new viewers may be surprised to discover that it's only three seconds long.

In 1941, a few short months before the attack on Pearl Harbor, Private Robert E. Lee "Prew" Prewitt is transferred to the nearby Schofield Barracks in Honolulu. His CO at Company G, Captain Holmes, learns that Prewitt was a Boxer and tries to recruit him for the Unit’s Boxing Club. When Prewitt refuses, Holmes decides to make the new recruit’s life a living hell.

Other characters in the story include Prewitt’s buddy and only supporter on base, Angelo Maggio; Holmes’s wife Karen and her lover, Sgt. Warden; Prewitt's girlfriend, "nightclub hostess" Alma; and Staff Sgt. Fatso Judson, the brutish stockade guard who becomes Magglio's tormentor.

The novel and film contain examples of:

Alternative Title(s): From Here To Eternity