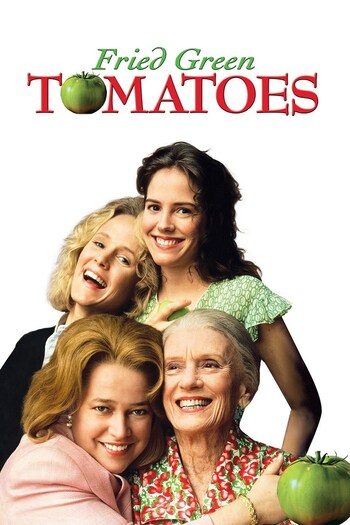 "What is your favorite movie, book and food?"
—Apu, The Simpsons
Advertisement:

Fried Green Tomatoes tells the story of two enduring friendships. The first, set in the modern day, is between Evelyn Couch, a dissatisfied, middle-age, menopausal housewife too frightened of death to commit suicide, and Ninny Threadgoode, a boisterous and talkative octogenarian who bolsters Evelyn's spirits with her storytelling. The story she tells is of another pair of women: incorrigible Tomboy and raconteur Idgie Threadgoode and sweet, stubborn Southern Belle Ruth Jamison, who together ran a café in Depression-era Alabama.

Ninny's rambling stories of Idgie and Ruth, their family and friends, and the colorful crowd attracted by the café, soon become the only thing Evelyn looks forward to. Gradually the stories converge on a single event: the murder of Frank Bennett, Ruth's abusive husband who vanished without a trace over fifty years ago after a late-night visit to the café.

Mrs. Threadgoode's love of life, even as her own moves toward its end, leads Evelyn to realize all the possibilities open to her and allows her to finally make peace with her own fear of death.

The sequel The Wonder Boy Of Whistle Stop was published in 2020. Like the original book, it has tons of characters (most of whom feature in the first book) and jumps around in time. The book mainly follows Ruth and Idgie's son Buddy "Stump" Threadgoode and his daughter Ruthie.