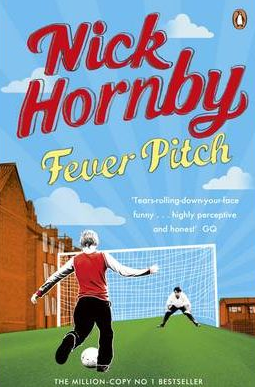 "All those things you feel for that team? I feel them too — for you."
— Fever Pitch, 2005 adaptation
Advertisement:

Fever Pitch (published in 1992) is author Nick Hornby's (About a Boy, High Fidelity) first book and is an autobiographical look at being a sports fan and all that entails in the context of growing up supporting Arsenal FC in England.

Each chapter covers a single match attended between the late 60s and the early 90s, and relates to Hornby's own childhood and life experiences. As much a memoir as a sports book, it was extremely well received and won several awards.

It has been since adapted into two movies, both romantic comedies, with one made in Britain and released in 1997 which was written by Hornby himself starring Colin Firth and a second adaptation starring Jimmy Fallon and Drew Barrymore which transplanted the story to Boston and replaced football (soccer) with baseball and Arsenal FC with the Boston Red Sox.

In both stories, Firth & Fallon (Paul and Ben, respectively) play obsessed fans of their respective squads and fall in love with Ruth Gemmell & Barrymore (Sarah and Lindsey) and must learn how to strike a balance between their fandom and maintaining a relationship.