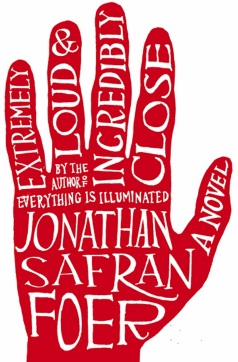 Extremely Loud & Incredibly Close is a 2005 novel by Jonathan Safran Foer (of Everything Is Illuminated fame). The book is written in multiple viewpoints. The majority is in the first person, and is told by Oskar, a 9-year-old boy. Between chapters are letters written by Oskar's paternal grandparents, detailing how they met and eventually separated.

The book is written in Anachronic Order, starting in the present and then going back two years detailing how the story got to that point. The story follows Oskar, whose father died during the 9/11 attacks. Oskar and his father used to play a game called "reconnaissance expedition", in which Oskar would be instructed to find a variety of objects. A year after his father's death, Oskar finds a key in an envelope which has the name "Black" written on it. He believes these are clues and are part of an expedition that his father was planning, and makes it his life's goal to discover the meaning behind it.

It has since been adapted into a 2011 film directed by Stephen Daldry, starring Tom Hanks, Sandra Bullock, Viola Davis, Max von Sydow and Thomas Horn as Oskar. It was nominated for Best Picture and Best Supporting Actor (Von Sydow).