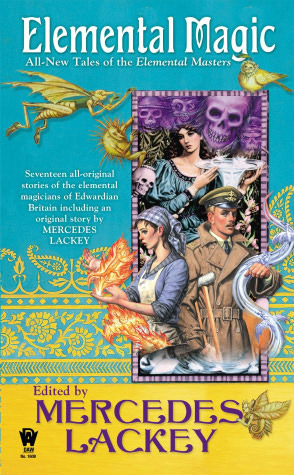 The novels in the Elemental Masters series, by Mercedes Lackey, are a mix of historical fiction and fantasy, with a big scoop of fairy tales stirred in. Most of them are set in the late 1800s-early 1900s.

The books “officially” in this series are:

The Fire Rose (Beauty and the Beast) uses the same pattern and tropes as the official books (though with minor differences, including a slightly different magic system and being set in America instead of Britain/Europenote  Essentially making it somewhat like a prototype ), but was published by a different company so isn’t normally included in a list of the series. However, it will be included on this page.

Alternative Title(s): The Gates Of Sleep, Phoenix And Ashes, The Wizard Of London, Reserved For The Cat, Unnatural Issue, Home From The Sea, Steadfast, Blood Red, From A High Tower, A Study In Sable, The Fire Rose, A Scandal In Battersea, The Bartered Brides