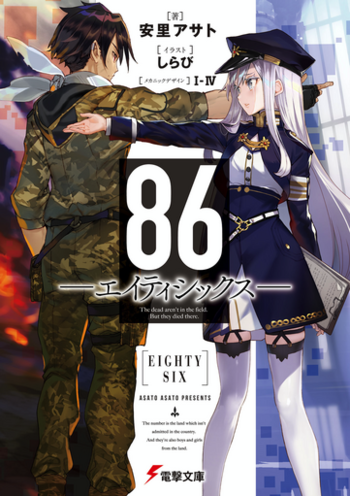 A War Without Casualties
Advertisement:

86 EIGHTY-SIX is a Military Science Fiction Light Novel series by Asato Asato note  her true name is Toru Asakura , illustrated by Shirabii, and with mech design by I-IVnote Fate/Grand Order players might recognize the artist for drawing Charles Babbage, Orion, and Anne Bonnie and Mary Read, while Xenoblade 2 players might be more familiar with this person as the designer of the Rare Blade Boreas. The series began publication in February 2017 after it won the Grand Prize at the 2016 Dengeki Novel Prize awards.

Major Vladilena "Lena" Milizé is given command of the veteran Eighty-Six Spearhead Squadron which, for some reason, goes through handlers like crazy, including some that committed suicide, and it is suspected the unit's leader, Captain Shinei "Shin" Nouzen, might have something to do with that. All the while Lena has to battle institutional racism and gaining acceptance with the squadron who, understandably, does not recognize her as one of their own even as she's trying to keep them alive.

Eleven volumes have been released in Japanese so far. The web novel side stories can be found here

(in Japanese). Yen Press has licensed the series for English release beginning March 2019.

A TV Anime Adaptation was confirmed

for 2020, done by A-1 Pictures, directed by Toshimasa Ishii and with music by Kohta Yamamoto and Hiroyuki Sawano. It was then delayed but eventually premiered in April 2021. After the conclusion of the first 11 episodes, a special Recap Episode aired on June 27th. The second cour began airing on October 2nd of the same year.

Warning: Unmarked spoilers for Volume 1 below, due to many First Episode Twists required to discuss any future volumes.

Fido, Spearhead Squadron's AI robot, starts recording the events leading to the reunion of the team, now reformed as the Giadian Army's Nordlicht Squadron after Shin and company first arrived in the country many months ago.

Fido, Spearhead Squadron's AI robot, starts recording the events leading to the reunion of the team, now reformed as the Giadian Army's Nordlicht Squadron after Shin and company first arrived in the country many months ago.