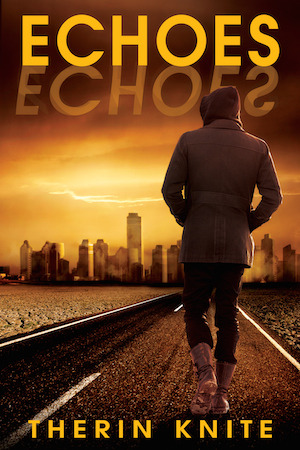 The apocalypse isn't always real, but when it is...
Echoes is a science fiction crime thriller series written by author Therin Knite [http://www.therinknite.com

]. It is set in the 2700s and follows the life and times of twenty-three-year-old protagonist Adem Adamend.

After a man-made apocalyptic event involving a Cure for Cancer gone wrong wiped out 99% of the human population in the 2200s, society floundered for centuries before it recovered. In the 2500s, the remainder of humanity joined together and created the United Republic of Earth, a globally united government, that rules over 20 districts spanning six continents and, as of the 28th century, a population of about 2.3 billion.

Echoes primarily takes place in the District of Columbia, the modern-day east coat of the United States.

Adem Adamend, a former Child Prodigy turned arrogant and stoic young adult, lives in the capital city of the District of Columbia: Washington (not to be confused with present-day Washington, D.C., which was completely demolished in the the aforementioned apocalypse).

The Smart Guy with a Dark and Troubled Past, Adem works as a Crime Scene Investigator for the Interdistrict Bureau of Intelligence (IBI), a CIA/FBI-type of government organization tasked with solving and preventing major crimes. Using his Sherlock Scan abilities to mentally reconstruct crimes, Adem is capable of solving cases far more quickly than his peers, but his arrogance makes coworkers resent him—save for his one and only friend, the Genius Ditz computer whiz Jin Connors, with whom Adem shares a deep bond resulting from a incident that occurs before the series begins, the "Jericho Bombing."

The first book in the series, itself named Echoes, begins with Adem getting called by his Mean Boss, Briggs, to a strange murder scene. Using his Sherlock powers, Adem discovers the middle-aged lawyer victim was murdered by...a dragon. A dragon that completely vanished off the face of the Earth after it burned the lawyer to death. But before Adem can make heads or tails of the murder, the case gets swiped from the IBI by the mysterious EDPA, the Echo Detection and Prevention Agency, a top-secret organization that investigates "weird" events. Adem, however, being a curious fellow, refuses to let the most interesting case he's ever seen slip out of his grasp...

And so begins Adem Adamend's journey into the world of echoes—dreams that come to life.

Also known as the series where it's always but never All Just a Dream.

The Current/Announced Books in the Series are: