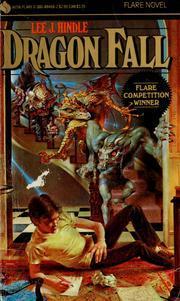 Dragon Fall is the first (and so far only) novel by Lee Hindle, published as the result of him winning the Avon/Flare Young Adult Novel competition

. The protagonist, Gabe, is a teenager who splits his time between high school, designing toys, and attending rock concerts with his friends. His most recent creation is a trio of humanoid dragons. After an incident at a local concert, Gabe starts to hear whispers from the dolls, suggesting that they may be alive. And, now that they are alive, they want him to get out...