Literature / Dragaera
aka: The Phoenix Guards 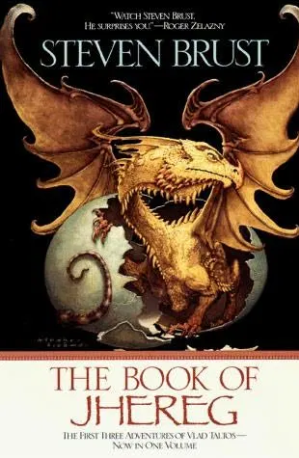 No matter how subtle the wizard, a knife between the shoulder blades will seriously cramp his style.
— Vlad Taltos, Teckla
Advertisement:

The world of Dragaera is the brainchild of Steven Brust. It serves as the setting for two of his novel series — the Paarfi of Woundwood books (including the now-complete Khaavren Romances series) and the Vlad Taltos books (ongoing) — as well as the standalone novel Brokedown Palace.

Dragaera is a fantasy world dominated by two major sentient races. The first are the Dragaerans, who are tall, long-lived, and vaguely elven. The second are the Easterners, who are human for all intents and purposes. Interestingly, both species call themselves "human," and use the formal name for the other. Most Dragaerans live in the vast and powerful Dragaeran Empire, which covers most of the main continent, and the rest inhabit some of the independent islands off the southern coast. Most Easterners live (surprise) to the east, in several small kingdoms, although some have emigrated to the Empire. Both of the series take place largely in the Empire. Brokedown Palace takes place in the Eastern kingdom of Fenario.

The Empire consists of seventeen houses/castes, each named after an animal on the planet. Although some houses are considered superior to others, a certain amount of peace between them is maintained by the custom that all seventeen get their turn to provide an Emperor or Empress. "The Cycle" determines the order. As each abdicates, the next house in line provides their Heir. Assassination of an Emperor is discouraged by the Orb, a mystic sphere that orbits the head of the current sovereign and protects him or her from harm...at least until it is time for the Cycle to change.

The number 17 is of mystic significance in Imperial culture, and that extends to the books themselves, which all run for 17 or 34 chapters. Another common trait to the books is Devera, a little girl who appears in some form in literally every book Steven Brust writes. In the Dragaera novels, she's established to be the daughter of a major character, only she technically hasn't been born yet.

The Vlad Taltos series describes the life of the Easterner Vlad Taltos, an Imperial citizen after his father bought their way into the House of Jhereg, which is essentially the "Mafia caste." Despite being a second-class citizen, Vlad makes his way through life as an assassin and a mid-level power player in the underworld of the Empire's capital. Most of the novels are written from the first-person perspective of Taltos himself, but Brust will sometimes experiment with other approaches.

The Paarfi of Roundwood books are a series of historical fiction novels written by Paarfi of Roundwood, an eccentric historian whose florid style is a parody of Alexandre Dumas. Each book in the series is based on a book written by Dumas. The books in the Khaavren Romances closely follow the structure of the The Three Musketeers stories, while The Baron of Magister Valley follows The Count of Monte Cristo. Paarfi writes the books during and sometime after Vlad's life, but they take place several hundred years before Vlad's time. Due to the long-lived nature of Dragaerans, there are a number of cross-over characters between the two series.

A short introduction to the setting, written for a non-canon spinoff pick-a-path adventure book (Dzurlord), may be read here

open/close all folders
Books in the Dragaera universe (so far)