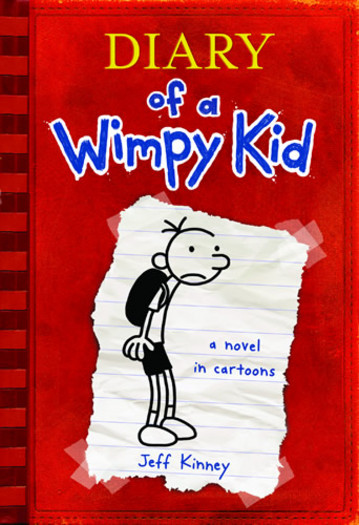 It's a JOURNAL!
First of all, let me get something straight: This is a JOURNAL, not a diary. I know what it says on the cover, but when Mom went out to buy this thing I SPECIFICALLY told her to get one that didn't say "diary" on it.
— Greg Heffley

A series of heavily-illustrated novels by Jeff Kinney based on his webcomic of the same name hosted on FunBrain, aimed at preteens. They tell the story of Greg Heffley, a self-proclaimed "wimpy kid" attempting to navigate the pitfalls and perils of middle school life. The books are presented as Greg's own journals, filled with handwritten notes and stick drawings of his daily adventures.

about the making of the Long Haul film in '17), as well as a Spin-Off book set in a Perspective Flip from Rowley called Diary of an Awesome Friendly Kid (2019), which in turn received a sequel called Rowley Jefferson's Awesome Friendly Adventure

Well, we're out of trope examples, so I guess this is THE END.