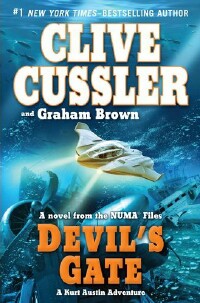 An adventure novel by Clive Cussler and Graham Brown, part of the NUMA Files, a spin-off series to the Dirk Pitt Adventures. Adventurer oceanologist Kurt Austin and his sidekick Joe Zavala face a band of Ruthless Modern Pirates led by a mercenary Andras aka "The Knife" who work for an african dictator Djemma Garand. Wishing to become a new Hannibal, he has built a Death Ray tower, kidnapping some scientists to complete the project. Now he threatens to destroy world nations' capitals unless they pay him a ton of money. Since his weapon burns any ships, planes and missiles on sight, it's up to the Big Damn Heroes to save the day.