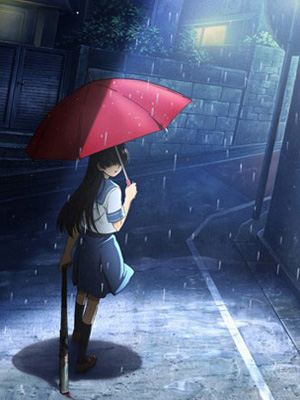 Juuzawa Juu: You said you were a covert government operative, right? Then I suppose I’ll also reveal my true identity. In truth, I was a king in my previous life.
Serial Killer: Poor you! You're insane, aren’t you?
Juuzawa Juu: Everyone in this world is insane. It is because they’re insane that they don’t notice... How twisted the world really is!
Advertisement:

Juuzawa Juu was just a normal delinquent teenage boy, spending his days getting into fights he would much rather avoid. One day, however, a strange girl named Ochibana Ame finds him and tells him that he was a king in his past life, and that she was his knight. She pledges fealty to him and swears to serve him as the knight she (at least believes) she once was. Originally, he wanted nothing to do with her, but when his classmate is murdered by a serial killer, he looks to her for help in solving the case.

Denpa Teki na Kanojo ("Electromagnetic Girlfriend") is a series of Light Novels written by Kentarou Kotayama and illustrated by Yamato Yamamoto; three volumes were published from 2004 to 2005, and the series has remained unfinished since then. The novels were adapted to two OVA episodes that were released in 2009. The books and the show take place in the same world as Kure-nai.