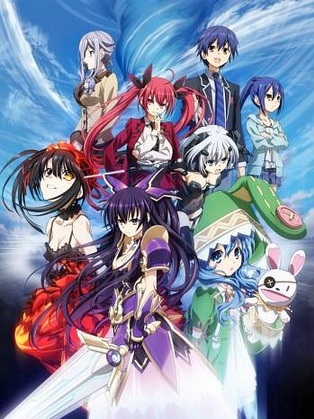 Date A Live is a Japanese Light Novel series written by Koushi Tachibana, with illustrations by Tsunako and published by Fujimi Shobo under their Fujimi Fantasia Bunko label. The series was published in Dragon Magazine from 2011 to 2020, with a total of 22 volumes.

The story is set in an alternate Earth where phenomena known by the generic term "Spacequakes" occur. The first of these spacequakes devastated thirty years before the time the story takes place, claiming 150 million lives. The protagonist, an Ordinary High-School Student by the name of Shido Itsuka, lives in a world where these disasters are common place. Schools regularly have drills in case of a spacequake, evacuations are done swiftly, and a group known as the JSDF disaster response team rebuilds the destroyed areas impossibly quickly. However things have gotten strange lately for Shido, the spacequakes that slowed down to a halt have suddenly appeared once again with terrifying frequency; and they all seem to be centered around where Shido lived...

After a confusing series of events, Shido soon learns that all is not what it appears in the world. He discovers that the spacequakes aren't natural disasters, they are caused by beings known as "Spirits" being forcibly sucked into this world from their own; and it also turns out that they happen to be top class Bishojo as well. He also finds out his little sister, Kotori, is a sadistic commander of a Spirit Response force, Ratatoskr, whose goal is to capture the Spirits without harming them. Unfortunately there is another group called the AST (Anti-Spirit Team) who feel that simply killing them is the best solution. Shido, being the kindhearted hero he is, decides to use any alternative to save the Spirits since killing them seemed wrong (despite the fact they seem to cause mass destruction wherever they go). And it turns out that there is a way to save the Spirits without hurting them, the Spirits are able to lose their powers and live amongst normal people if Shido manages to... make them fall in love with him? As his sister Kotori bluntly lays it out for him, "Since it's like this, just go date her, and make the spirit fall for you!"

And so yet another hero is created, off to save the world through the power of harems. But he better be careful, because the nefarious Isaac Wescott, Director of Deus.Ex.Machina Industries, seeks the power of the Spirits for himself so he can make a new world.

Three manga adaptations were published: Date A Live (which follows the original novels, and got Cut Short), Date Ast Like (a Yuri spinoff involving Origami, with a girl from the AST called Mikie as the main character), and Date A Origami (a 4-koma which focuses on the romantic comedy aspect of the series). An anime adaptation produced by AIC Plus+ was announced for the Spring 2013 Anime season. At the end of the last episode, a second season was announced

, this time being produced by Production IMS. At the end of the Second Season, a film adaptation was announced

Not to be confused with Live A Live.

Date A Live provides examples of: