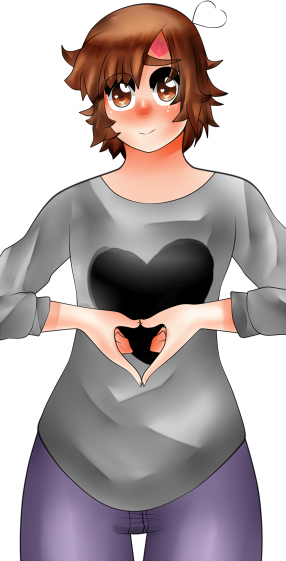 He punched the Minotaur in its face.....I'M SERIOUS
Are you an otaku neat with no job and a huge crush on that bread shop girl across from your building? Then you might be the pathetic Hibiki Ogawa! But do not despair, we'll send cupid to help with all of your insecure love needs; we only ask that you feed him, clothe him and, well...fight off the deadly mythological beasts that will rise up to watch you fail... simple, no?

Cupid able is a literary manga on Fictionpress.com; its author, Kouki is a member of the RAOSC forum (RPG And Own Stories Continued) as well as an artist on deviantart; you can find his work here: [1]

Hibiki Ogawa is an anti-social otaku NEET who's afraid of everyone and everything; he has one love interest though, the kind and cute bread girl across from his apartment building, Emily Heart. This is a story of Hibiki's misadventures with the god of love, Eros and their attempts to win the heart of the bread girl through a series of comedic antics, it doesn't help that mythological creatures and pesky god's are constantly rising to the occasion to make sure Hibiki fails...big time. It can be read here: [2]

The story is a romantic comedy but is also filled with heavy action scenes and some dark moments, having a mix of love and war shown in the duel personalities of Eros who, being the son of Love (Aphrodite) and War (Ares), has a violent personality and loving personality that present themselves throughout the story.

"It's for children right!? I mean, if you wanted to I wouldn't mind! Not to say that I want to go but I think it'd be a good experience if we went and Eros just got to the city so it would be for his sake too! I'm not saying that I'm into those amazingly action packed movies because they're for kids and we're too old to watch them at home when no one's looking and my grandpa's asleep not to say that I do that all the time or anything because it would be weird, don't you think that would be weird!?"