Literature / Count to the Eschaton
aka: Count To A Trillion 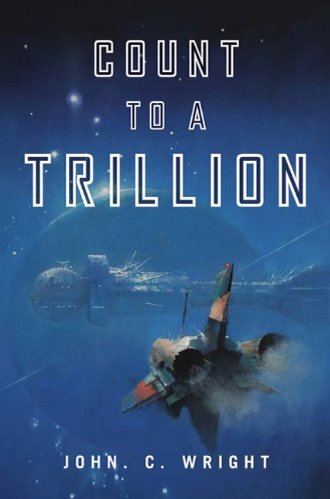 The Count to the Eschaton series is a six-volume hard science fiction/Space Opera series by John C. Wright.
Advertisement:

Menelaus Ilation "Meany" Montrose, a Texas-born gunslinger, lawyer, mathematician, and astronaut, goes insane after injecting himself with an IQ-increasing Super Serum, and is cryosuspended during the voyage to the Monument. He wakes to a Bad Future. In little more than 8,000 years, the alien beings who set up the Monument as bait to test younger civilizations' starfaring progress, will arrive and enslave the Earth's population. Resisted by the remaining members of the crew—particularly his former best friend, Ximen "Blackie" Del Azarchel—Menelaus decides to spend the intervening millennia preparing humankind to resist.