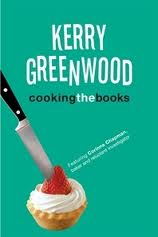 Corinna Chapman is a baker in modern-day Melbourne, Australia. She owns and works in her bakery, Earthly Delights (and she has the Hieronymus Bosch painting on the wall) and lives an ordinary, happy life. She's had a fairly tough life, but now she's happy to get up every morning at 4 AM (OK, not so much about that), bake bread for a living and remain good friends with almost everyone in her very Roman apartment building.

Until one day in summer, she discovers a junkie who OD'd outside the bakery. From there, she is introduced to Daniel Cohen, a private detective, and forms a relationship with him while helping him solve the mystery of whom has been supplying addicts with drugs that are purer than they expect. The relationship works out and they form a lasting relationship. Tying into this case is Jason, an ex-junkie who starts out cleaning the bakery and ends up as the assistant baker and the first of a series of people who move into the building, book by book.

From there, the books basically run like this: Either Corinna is pulled into a mystery by accident, or she aids Daniel with one of his cases. In the meantime, another mystery becomes apparent in the apartment building, called Insula, both of which have to be solved. Someone in the apartment building will be involved in the first case, and by the end of the book all of the mysteries will be solved, and everyone will be much better and happier for it.

There are six novels: