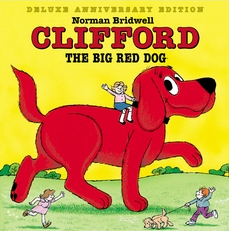 Clifford the Big Red Dog. If you're from North America, you've most probably heard of this series of picture books, although you probably didn't know that the first book was originally published in 1963. Since then, many, many more books have been published, as well as an animated adaptation.

The books, which were written by Norman Bridwell, star the adventures of the eponymous Clifford, a giant of a dog, and his owner, Emily Elizabeth Howard. Clifford originally started out as the runt of the litter, but Emily Elizabeth's love made him grow—and grow, and grow, and grow, ad infinitum. Well, not quite — he stopped growing once he was about twenty-five feet high, although his height isn't set in stone; it varies, depending on the story. He was way too big for the Howards to properly take care of Clifford in the city at this point, so they moved to the country (Birdwell Island in the TV adaptation) where he could have more room to move around.

In the 80s, Nelvana picked up the rights to the series and spun off six half-hour direct to video specials with it. Starring Alyson Court opposite Brent Titcomb, each special featured a typical slice-of-life storyline peppered with two songs, and was animated with No Fourth Wall, allowing Emily and Clifford (as a Talking Animal) to "converse" directly with the viewers, but strangely Emily and Clifford could never converse among themselves in English, as to leverage on Scholastic's then-recent study that children learned better through participation rather than through repetition. After that, the franchise reverted to books (unless you count in the discontinuity that is "Clifford's Sing Along Adventure", the live-action mixed footage direct to video special by Warner Home Video that was released in 1986).

This went on until the year 2000. Scholastic wanted to do another animated adaptation. Throwing away the old format and rebooting the continuity, it now featured Grey DeLisle as Emily Elizabeth, opposite John Ritter as Clifford, with two new characters added to the leading cast, these being timid bulldog T-Bone (Kel Mitchell) and hyperactive poodle Cleo (Cree Summer). The new version was such a phenomenal success that it ran for two seasons, spun off a movie, and even resulted in a licensed kiddie ride. Things weren't so rosy after the movie, however. John Ritter passed away shortly after of a heart attack on the set of 8 Simple Rules (at that point called "8 Simple Rules for Dating my Teenage daughter"). While Scholastic had been pondering upon the idea of a sequel for a while, the death of Mr. Ritter cemented the decision on a spinoff, titled Clifford's Puppy Days. Two seasons were made before Scholastic decided to take a break from making a series out of the franchise again, while maintaining the series franchise. The books are still being printed, along with merchandise.

that Illumination and Universal were working together to create a new Clifford movie, which would be based on the original book, but wouldn't have anything to do with the television series. However, the film went into Development Hell and Universal ended up moving on to other projects, causing the rights to expire. The rights were then picked up by

Paramount, and Justin Malen (who penned the Baywatch movie) was attached as screenwriter. Watch the teaser here

Norman Bridwell passed away in December of 2014. Two more books were released after his death, but it seemed that the series has come to a final end following that.

was released in December 2019 on Amazon Prime, with episodes also being broadcast jointly on PBSKids. (which, for its purposes, labels it as "Season 3" on its video app.) Further information

revealed that the series shows Clifford and Emily Elizabeth talking directly to each other, that a massive new book launch in association with the series is planned, and that the Paramount film is still in the works. Among the staff of the remake is Jennifer Oxley, known for series such as Peg + Cat and Wonder Pets!. Books

featuring the new design and continuity began releasing in June 2019.