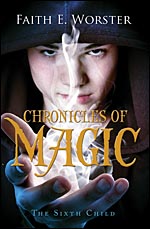 Chronicles of Magic: The Sixth Child is the first book in a YA fantasy series Chronicles of Magic by Maine author Faith E. Worster. It follows some of the usual tropes— a prophecy of doom, a Chosen One, and an evil queen— but nicely ties them together with a colorful, well-developed cast and a few surprising twists.

Benjamin is a weak, timid boy and the son of the equally weak, timid town baker. When his father is taken by the queen's soldiers, Ben musters what little courage he has and goes after him... without a weapon or a plan. Naturally concerned, his friends Rowan (an eccentric aristocrat) and Halfrida (a disturbed girl whose entire family was gunned down by the soldiers a few months before the story proper) go after him, having their own adventures on the way. There's also a group of fanatical rebels, a secret plot, and magic— only Magic is an actual, living being who imparts its power unto those who believe in it. Due to the queen's family stomping out any knowledge of it, however, most people don't— and those who do are either imprisoned or killed... brutally.

Written with a dark and dry humor from multiple characters' perspectives, it quickly pulls the reader into the action and operates under an Anyone Can Die mentality that leaves you guessing until the very end.

This series contains examples of the following tropes