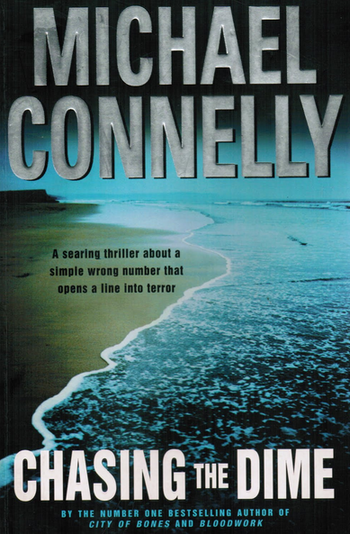 Chasing The Dime is Michael Connelly's twelfth novel, and the fourth which does not feature Detective Harry Bosch as a main protagonist. The story is more of a techno-thriller than Connelly's past works, which in combination with Connelly's involvement with the TV series Level 9 and Harry Bosch retiring at the end of City of Bones, implied a Genre Shift that never really materialized.

Instead of Bosch, our one-off hero is Henry Pierce. Pierce is an entreprenur in "molecular computing", an experimental field that seeks to reduce computers to molecular size, thus creating machines the size of a dime (hence the title), or smaller. Possibilities in the field include computers tiny enough to be injected into the human bloodstream where they could be used for diagnostics. Pierce has just created a revolutionary new device, a molecular-sized power source—no AC outlets in a human being's arteries—which could open up the whole field of molecular computing. His company is about to make a pitch to a rich investor whose capital is needed to bring Pierce's theoretical device into reality.

Unfortunately for Henry, his personal life is not as neatly organized as his company. Henry is actually mired in deep depression, having just broken up with his girlfriend, Nicole. Henry is moving into a new apartment following the breakup, and has gotten a new phone to go with the apartment. The phone starts ringing off the hook with calls from strangers looking for a prostitute named Lilly. It seems that the number Lilly the hooker posted on the Internet for potential johns is the same number that has just been reassigned to Henry.

The connection to an Internet call girl has special meaning for Henry. His older sister was a teenaged runaway who took to life as a Streetwalker before she was murdered by a serial killer. That, and his general depression following the breakup with Nicole, leads Henry to seek out the beautiful, mysterious Lilly. He hopes to save her, after he failed to save his sister. However, Henry gets more than he bargained for, and winds up snared in a far darker mystery.