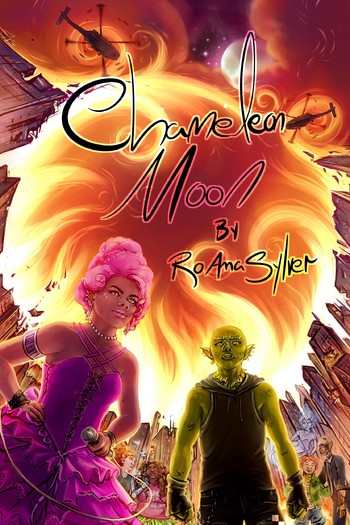 The city of Parole is burning. Like Venice slips into the sea, Parole crumbles into fire.

The entire population inside has been quarantined, cut off from the rest of the world, and left to die - directly over the open flame. Eye in the Sky, a deadly and merciless police force ensures no one escapes. Ever. All that’s keeping Parole alive is faith in the midst of horrors and death, trust in the face of desperation… and their fantastic, terrifying, and beautiful superhuman abilities.

Regan, stealth and reconnaissance expert with a lizard's scales and snake's eyes, is haunted by ten years of anxiety, trauma and terror, and he’s finally reached his limit. His ability to disappear into thin air isn’t enough: he needs an escape, and he’ll do anything for a chance. Unluckily for him, Hans, a ghostly boy with a chilling smile, knows just the thing to get one. It starts with a little murder.

But instead of ending a man’s life, Regan starts a new one of his own. He turns away from that twisted path, and runs into Evelyn, fearless force on stage and sonic-superheroic revolutionary on the streets. Now Regan has a choice - and a chance to not only escape from Parole, but unravel the mystery deep in its burning heart. And most of all, discover the truth about their own entwining pasts.

They join forces with Evelyn’s family: the virtuosic but volatile Danae, who breathes life into machines, and her wife Rose, whose compassionate nature and power over healing vines and defensive thorns will both be vital to survive this nightmare. Then there’s Zilch, a cool and level-headed person made of other dead people, and Finn, one of Parole’s few remaining taxi drivers, who causes explosions whenever he feels anything but happy.

Separately they’d never survive, much less uncover the secret of Parole’s eternally-burning fire. Together, they have a chance. Unfortunately, Hans isn’t above playing dirty, lying, cheating, manipulating… and holding Regan’s memories hostage until he gets his way.

Parole’s a rough place to live. But they’re not dead yet. If they can survive the imminent cataclysmic disaster, they might just stay that way…