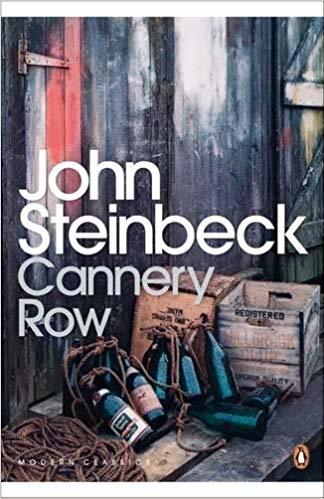 Cannery Row is a 1945 novel by John Steinbeck.

The central premise is simple enough: in Monterey, California's Cannery Row neighborhood during The Great Depression, a group of men decide to throw a party for their friend Doc, a marine biologist who has a laboratory in the neighborhood. Interspersed within the story are little vignettes about the inhabitants of Cannery Row and the surrounding neighborhoods.

Nine years later, Steinbeck wrote a sequel, Sweet Thursday, which returned to a post-WWII Cannery Row. It featured most of the same characters, added a few new ones, and had Doc find romance in the form of a young woman named Suzy.

Rodgers and Hammerstein produced a musical Pipe Dream based on both books (in fact, Steinbeck wrote Sweet Thursday while working on the stage treatment) in 1955. It was not a success.

A movie version of Cannery Row was released in 1982, starring Nick Nolte and Debra Winger, and it borrowed elements from both novels.