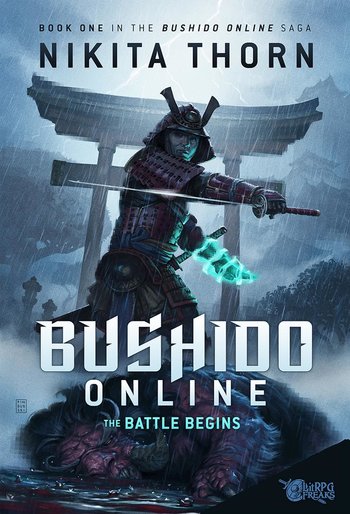 All Seth Kinnaman has ever dreamed about is to be the best fighter there is and has dedicated his entire life to training to be the best. After some many years, he's finally ready to join the biggest tournament on Earth and join the world stage with hundreds of fierce competitors for the title.

Then all his dreams are shattered in a single moment...

When his opponent uses an illegal move on Seth during the semifinals, the injury he suffers leaves him blind and with no chance to ever achieve his dream. Left depressed, everything seems to be over when his manager and friend puts him in touch with a company that may be able to help him. That's when he's introduced to Bushido Online, a game that promises to keep his skills sharp while he figures out what his next move is going to be.

Set in feudal Japan, this VRMMORPG is the land of ninjas and samurai. A world where the most honorable warriors meet the vilest bandits and where mythical creatures roam free. When he'll enter that new reality, Seth will discover that while it's easy to make friends there, one doesn't have to try very hard to get his fair share of powerful enemies.

Soon he's going to have entire clans hunting him down as he struggles to learn the ropes and regain a sense of normalcy. Thankfully, Seth has a few things going for him: his extensive knowledge of combat and a never-say-die attitude.

The Series Show Examples of...