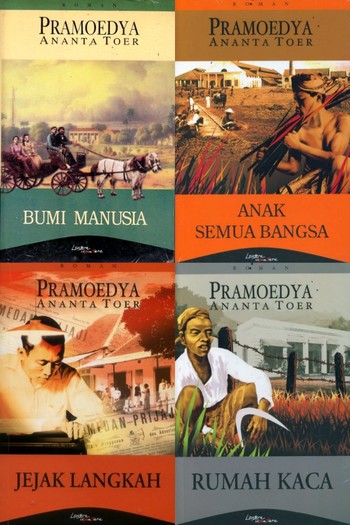 Covers of the current Indonesian edition. Left to right  Bumi Manusia (This Earth of Mankind), Anak Semua Bangsa (Child of All Nations), Jejak Langkah (Footsteps), and Rumah Kaca (House of Glass)
"An educated person must learn to act justly, beginning, first of all, with his thoughts, then later in his deeds. That is what it means to be educated."
—Jean Marais, ch. 3 of This Earth of Mankind
Advertisement:

The Buru Quartet (Indonesian: Tetralogi Buru, literally: the Buru Tetralogy) is a four-part Historical Fiction epic by Indonesian writer Pramoedya Ananta Toer. Originally dictated to his fellow prisoners during his term in the political prison island of Buru, Toer labored to ensure its survival and eventually managed to have the publishing house Bintang Timur put forth the first book, This Earth of Mankind (Indonesian: Bumi Manusia) in 1980, only to have the ruling New Order ban it from circulation shortly afterwards for "Marxist-Leninist subversion". Subsequent books, Child of all Nations (Indonesian: Anak Semua Bangsa, 1981), Footsteps (Indonesian: Jejak Langkah, 1985) and House of Glass (Indonesian: Rumah Kaca, 1988) similarly met swift banning, threatening to prematurely rid the Indonesian language of what would become perhaps one of its most well-known works. Fortunately however, foreign publishers were quick to take notice. Australian Embassy staff Max Lane worked on an English translation, and soon enough, the series gained more relative fame in a myriad of foreign lands than most of its local counterparts could have imagined.

The story itself begins in colonial East Java, as the nineteenth century draws to an end. Minke, the main character, is a teenage son of a wealthy Javanese aristocrat and a successful HBS student, a rare feat among natives. Minke grows up in awe of European might, fostering an appreciation for Dutch literature and spending his spare time writing for a Dutch-language newspaper under the pseudonym "Max Tollenaar". All seems well enough until he runs into Nyai Ontosoroh, the nominal concubine of wealthy Dutch businessman Herman Mellema who in reality runs his entire company together with their beautiful Indo daughter Annelies while her elder son Robert looks upon his presence with great suspicion. Soon enough, Minke's previously innocuous life ends up in a tangled web of romance, rejection and race politics, setting him on a journey of self-discovery between differing cultural realms.

One of Indonesia's quintessential contributions to the literary genre of postcolonialism, the books have spawned numerous adaptations. The most notable of these are Bunga Penutup Abad (English: The Flower that Closes a Century), a theatrical adaptation of select events from the first book and the prologue of the second book which starred A-list Indonesian actors Reza Rahadian, Chelsea Islan, Happy Salma, Lukman Sardi, and ran from 2016 to 2018 in Jakarta and Bandung, as well as a 2019 3-hour film adaptation of the first book directed by Hanung Bramantyo.