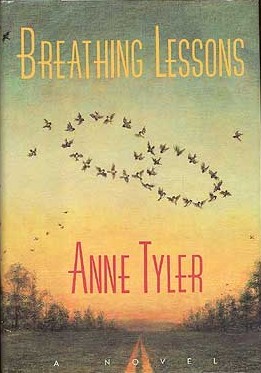 "Before you can drive a car you need a state-approved course of instruction, but driving a car is nothing, nothing, compared to living day in and day out with a husband and raising up a new human being."
Advertisement:

Breathing Lessons is a 1989 novel by Anne Tyler.

Ira and Maggie Moran are a married couple pushing fifty. Maggie is excitable and hyperactive and prone to meddling: her husband is calm and taciturn and tolerates her flights of fancy. They have their frustrations and disappointments in life, the biggest of which is their older child, their son Jesse. Jesse knocked up his girlfriend Fiona when they were only seventeen, and they got married. Unfortunately the marriage ended in failure within a year and Fiona left with their daughter Leroy; the Morans haven't seen their granddaughter in years. If that weren't bad enough, Jesse has dreams of being a rock star and is stuck in an extended adolescence with his garage band, while he shifts from job to job.

The story is set over the course of a single day. Ira and Maggie are going to the funeral of their old friend Serena's husband Max. Back home, their daughter Daisy is getting ready to go to college the very next day. Maggie, who is prone to sudden fits of enthusiasm, hits on an idea. They will drop by Fiona's house, cajole her into coming back home with them, and maybe, just maybe, get her back together with Jesse.