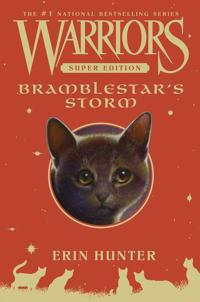 Bramblestar's Storm is a novel in the Warrior Cats franchise. It is the seventh installment of the Super Edition series, and takes place after the Omen of the Stars series.

Set six moons after the events of The Last Hope, the Clans are still recovering from the final battle against the Dark Forest, and mourning those who fell defending their Clanmates from the shadowy warriors. Bramblestar leads ThunderClan now, and he struggles to measure up to his predecessor and mentor Firestar, one of the greatest leaders the Clans have ever known. But more trials are coming for the Clans, and as a storm rises, all of Bramblestar's skills will be put to the test.

Bramblestar's Storm was released on August 26, 2014. It was written by Cherith Baldry.

A novella titled Dovewing's Silence, was released November 4, 2014. It explained how events between The Last Hope and Bramblestar's Storm had transpired. It served as a prequel and somewhat of a lead-in to the novel.

As well, Bramblestar's Storm served as a sort of launching point for the sixth arc, A Vision of Shadows, establishing concepts and characters which would lay the groundwork for the arc.