Literature / Bored of the Rings 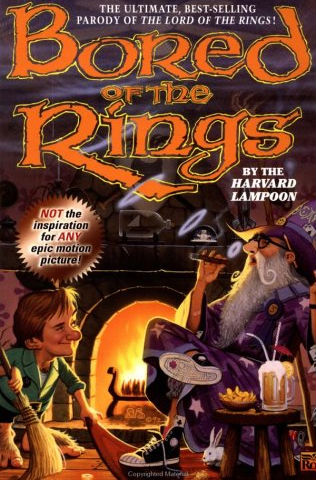 "Do you like what you doth see . . . ?"
"This ring, no other, is made by the Elves
Who'd pawn their own mother to get it themselves.
Ruler of creeper, mortal and scallop,
This is a sleeper that packs quite a wallop.
If broken or busted it cannot be remade.
If found, send to Sorhed. (The postage is prepaid.)"
— Inscription on The Great Ring
Advertisement:

An, and possibly the, outrageous parody of J. R. R. Tolkien's The Lord of the Rings written by Henry Beard and Douglas Kenney and published in 1969 by the staff of the Harvard University humor magazine, The Harvard Lampoon. (The members of which, not coincidentally, would go on several years later to found The National Lampoon magazine.)

Produced during the first wave of Tolkien's popularity, when LOTR fandom was a hallmark of the counterculture, Bored draws a deliberate parallel to the contrast between LOTR's epic, almost academic, style and the bohemians and hippies who typified its fans at the time. In part BOTR accomplishes this by slavishly mimicking the form of the book, both in content and in physical layout — the original

of the first authorized Tolkien paperbacks published in the United States, right down to the back-cover note warning of the unauthorized editions which had been previously published. However, draped over this superficially Tolkienian framework is an over-the-top and frequently hallucinogenic tale that twists every element of The Lord of the Rings into something ridiculous yet still recognizable.

The book manages to find and skewer all the high points of Tolkien's magnum opus with considerable alacrity. In the first few chapters we meet a bevy of under-impressive characters, including:

Together they make up a fellowship intended to see to the destruction of the Great Ring (of elvish design but manufactured by Sorhed under license), a fellowship which sets forth across the nations of Lower Middle Earth with the dark land of Fordor as its goal, bickering and sniping at each other all the way. Although no one in this story is anywhere close to competent, the fate of the world (or something) depends on their quest being successful.

In a sense, it is one continuous novel-length example of Sophisticated as Hell.

A Video Game inspired by, but not based directly on the book, was released in 1985.