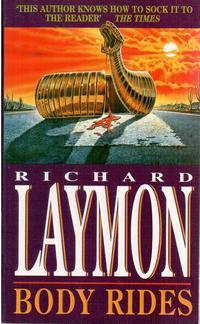 Body Rides is a 1996 supernatural thriller novel by Richard Laymon. It is about Neal, a guy who, while driving through a bad neighborhood late at night, accidentally manages to save a young woman from a deranged sadistic killer. As a reward for saving her life, the woman gives Neal a magical golden bracelet. The artifact allows it's user to exit his/her own body in the form of incorporeal spirit and enter the bodies of other people. To see, hear and feel everything they experience, including their inner thoughts and emotions. This constitutes the titular body ride. At the same time, rider can not control a host body in any way, and can not even communicate with the host mind, being just a passive observer in a passenger seat.

Neal, excited and shocked by this sudden gift, tries to figure out what to do next. What he still doesn't know is that the psycho shot by him that night is not quite dead. He survived and wants revenge. Neal, the woman saved by him, and everyone close to him are now all in mortal danger...