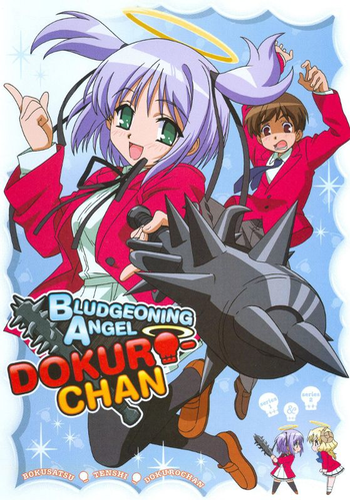 Bludgeoning Angel Dokuro-chan (Bokusatsu Tenshi Dokuro-chan in Japanese) is a small Japanese franchise consisting of 10 light novels plus one extra book, six "pairs" of anime episodes under Hal Film Maker, 3 volumes of manga, and a PlayStation 2 video game. The series centers around a boy named Sakura Kusakabe, a fairly nondescript Junior High student that was marked for death by God because he will invent a form of immortality in the future that prevents women from aging after 12 years of age (creating "a pedophile's world", as one character comments). God sends Dokuro, an angelic assassin, back in time to kill him.

But alas, Dokuro finds herself enamored with him and decides that she can prevent this horrible future by keeping him too distracted to ever stumble upon the method. However, due to her irrational nature, she ends up wrecking his life in the process. One Running Gag is that Dokuro does, in fact, kill Sakura... repeatedly. Usually if he touches her in a way she views as inappropriate... or says something she misinterprets... looks at her funny... is just there... but she always resurrects him immediately afterwards. Drama unfolds when another angelic assassin, Sabato, is sent to do the job that Dokuro is putting off and Dokuro ends up taking on a role as Sakura's "protector" (death by Sabato seems almost preferable).

The series derives most of its humor from crossing every line in parodying the whole Magical Girlfriend genre (and plenty of other Anime tropes). In that in has quite a few similaries with Magical Witch Punie-chan, with which it shares the directing and screen-writing talents of Tsutomu Mizushima. Bokusatsu Tenshi Dokuro-chan manages to often be far more brutal in its violence though. Sakura doesn't just get killed, he gets splattered in the most creatively gory ways possible (it actually becomes comedy when he doesn't get killed). Along with completely shattering the masquerade and the total creepy honesty of most of the secondary characters, it certainly is a unique show.