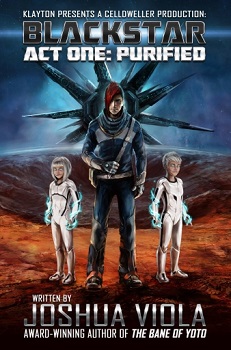 No price to great no distance too far... / For when you wish upon a Blackstar...

When Scott "Klayton" Albert produced his Wish Upon a Blackstar album, he envisioned an epic tale that spans across the cosmos and space. He did his best to narrate his story in his music, but it was ultimately too vague for a coherent story to form. Klayton, the tenacious artist he is, wasn't willing to let his story fade away, and decided to put his epic down into words. Enlisting the help of the award-winning author Joshua Viola, together they created the Blackstar

series of novels, the first act released along with a tie-in album on December 4, 2013.

Act One: Purified introduces us to the world that Rezin inhabits. In the distant future, an impact by the asteroid Solaris has decimated Earth. After the dust settles, civilization hangs on by a thread; there remains one city for the few privileged, Central, and the rest of the human race must survive in the harsh Outlands. However, neither those living in luxury in Central or those struggling in the Outlands desire anything about the present, and so look to the past. To keep the people happy, Re:Memory offers citizens a glorious glimpse into the past, making a lucrative enterprise off selling "Retros," stored memories of those who lived before the end.

Enter Rezin, a man with a mysterious past who makes a living off slicing into Re:Memory's databanks and selling the copied memories on the black market. Rezin is the best in his career, amassing a veritable fortune of his endeavors, but one day he hacks into the wrong Retro, and find himself pursued by Kaine, the "benevolent" despot of Central. Forced to flee to the Outlands, Rezin embarks on an epic journey across space and time to uncover the truth behind the enigmatic Blackstars.

The story shows examples of these tropes: