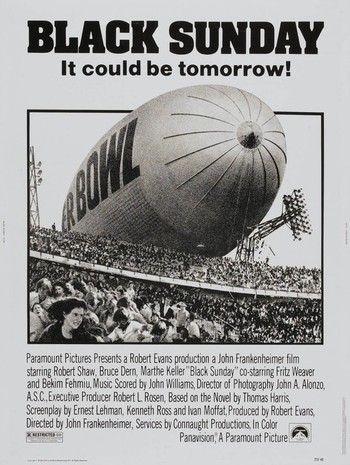 A 1975 thriller novel by Thomas Harris, adapted into a 1977 film directed by John Frankenheimer and starring Robert Shaw and Bruce Dern.

Long before Harris invented Hannibal Lecter, he invented Michael Lander, an embittered Vietnam vet who has been mentally unraveling due to the torture he went through at a North Vietnamese POW camp and the failure of his marriage as a result of his resultant problems reintegrating in society after the war. He is finally driven psychotic when he catches his wife riding her lover during woman-on-top sex, and the lover runs out of the house after beating Lander senseless.

Lander approaches a Palestinian terrorist group and offers to use his job as a blimp pilot for the Aldrich Rubber Company to detonate a bomb packed with plastique and hundreds of thousands of steel rifle darts over New Orleans' Tulane Stadium during the Super Bowl game, killing in excess of 80,000 people — including the President of the United States, who will be in attendance — at one stroke.

The only person who can stop him is a Mossad agent, Major David Kabakov. Kabakov only knows that a man who may be American has met with a Black September-affiliated terrorist group (which they discovered from a tape made in advance, captured during a raid by the Israelis on one of the group's safehouses), and that the terrorists will "begin the year with violence." So, working with FBI agent Sam Corley, Kabakov tries to figure out just where, when, and how said violence is to occur, hopefully before it's too late.

We watch in fascination as Lander's plan goes through with inexorable precision toward its deadly outcome, assisted by Dahlia Iyad, a woman who has a rare position of authority in the Black September organization. Some events become known to Kabakov, who eventually comes to the conclusion that the target will be the Super Bowl, in view of the statement in the terrorist announcement that was captured early.

The novel and the movie have several differences. Kabakov dies in the novel, while Moshevsky dies in the film. In the movie, Muslim terrorist Faisal dies about halfway through, but in the book he lives and is taken to Israel to stand trial. The novel has the Super Bowl in New Orleans; the movie has it in Miami, as the film shot footage at Super Bowl X. The novel has Kabakov and his doctor Rachel Bauman entering into a love affair; the latter character doesn't appear in the movie. Finally, the novel used "Aldrich" for the company Lander worked for; in the movie, Goodyear actually approved use of their name and their blimp in the movie.

Not to be confused with Mario Bava's classic 1960 horror film.