Literature / Battle for the Ages 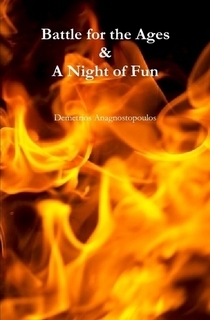 Battle for the Ages is the sixth volume of The Spectral Chronicles.

One morning while having breakfast, the Champions of the Light receive a letter from a mysterious writer only known as "Seth," who wishes to celebrate their and the Red Knights' success over The Legions of Hell. Suspecting that it may be a trap, only a select few members of each time decide to investigate: Demetrios, Princess Lily, Max, Lynessa, Ashur and Darulai, Jason, Michelle and Pharaoh, and Emily. They find a mysterious dungeon, whereupon they meet the secretive Seth... who unveils himself to be the demon lord Astaroth! Not only that, the heroes have been roped into a tournament of Astaroth's own design to kill them all one by one. While they're fighting in his tournament, the demon lord's legions attack the city of Kinardas in their campaign to bring planet Earth into the empire of Pandemonium at very long last...