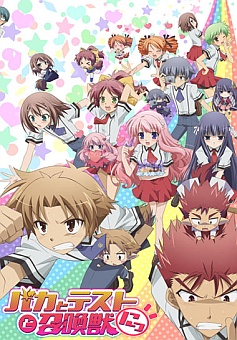 At Fumizuki Academy, a new class system has been implemented. Students are separated into classes A through F based on entrance exam results, and the quality of classrooms and facilities vary according to level. They can also conjure Summoned Beings, miniature versions of themselves whose strengths are based on their test scores, to engage in inter-class matches called Examination Summons Battles (ESB). If a lower class defeats an upper class, the former can impose a trade of facilities.

Mizuki Himeji was forced to skip placement exams due to a fever, technically forcing the poor girl, who has the brains to become a Class A-caliber student, to end up in the woefully ill-equipped and moldy Class F. Among her classmates there are: Yuuji Sakamoto, the Brilliant, but Lazy Class Representative; Minami Shimada, the only other girl in class and a violent tomboy; Hideyoshi Kinoshita, an extremely effeminate stage actor; Kouta Tsuchiya, the resident pervert; and Akihisa Yoshii, the "biggest idiot on campus" who, out of sympathy for Mizuki, decides to start an ESB with Class A to help her climb up the ranks. It's a bunch of misfits against the world — and the world is more than ready. It's time to see if they are... up to the test.

Baka and Test: Summon the Beasts (Baka to Test to Shoukanjuu, literally "Idiots, Tests and Summoned Beasts") is a series of Light Novels written by Kenji Inoue and illustrated by Yui Haga, which was published from 2007 to 2015; the main story ran for a total of 12 volumes, with six volumes of side stories. An anime adaptation first aired in the winter of 2010. While it's not animated by Studio Shaft, it is directed by Shin Ohnuma as part of SILVER LINK., and many Shaft-isms are prevalent in the series. The first season is 13 episodes and finished airing on March 31, 2010 with a second season following suit in Summer 2011. There are also two manga adaptations.

The series is also licensed by Funimation. You can now watch the series on their video portal, here

. All character-specific tropes go to the character sheet; multiple-character tropes can remain here.

Baka and Test: Summon the Beasts These tropes will be on the test:

This will be on the test.

Alternative Title(s): Baka And Test Summon The Beasts, Baka To Test To Shoukanjuu