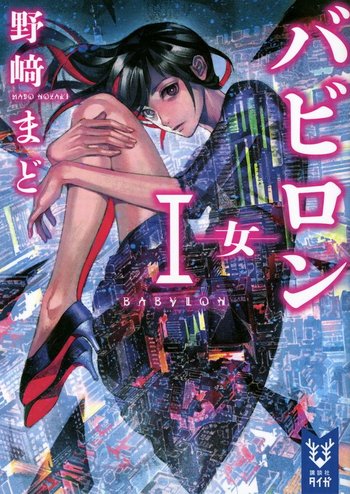 Babylon is a novel trilogy written from 2015 to 2017 by Mado Nozaki (Kado: The Right Answer) with artwork done by Zain under Kodansha's Kodansha Taiga novel label.note There's word that there's a fourth volume that's not released yet, although it's suggested that KT asked Nozaki if he can do so since the series is left at a cliffhangar and Japanese/foreign critics have pointed it out that the third volume is making a lot of readers/viewers speculate.

It has received a manga adaptation by Nobuhide Takishita in Comic Days magazine under Kodansha's Afternoon KC imprint in 2019, with an October 2019 anime adaptation directed by Kiyotaka Suzuki and produced by Koji Yamamoto while the scripts are written by Minaka Sakamoto and music done by Yutaka Yamada and animation by Revoroot.

The anime adaptation is shown worldwide with regional subtitles under Amazon Prime with the first three episodes aired together. In Japan, it's available via Tokyo MX, BS11 and AT-X. It ran for 12 episodes.

The Tokyo District Public Prosector's office authorizes a daylight raid in Tokyo's newly created Shiniki ward to investigate a pharmaceutical company named Japan Supiri, suspected of faking medical test results from a university. One of the prosecutors involved is Zen Seizaki. While the DPPO investigates, an anesthetist by the name of Shin Inaba was found dead. Left behind is a mysterious document with the word "F" written on it with hair and skin samples.

As Seizaki investigate the case, he learns that a mysterious group is making plans to covertly manipulate the ward's local mayoral election and deceive the locals by using fake information. At the center of law enforcement investigation is a woman named Ai Magase.

Babylon has the following tropes: