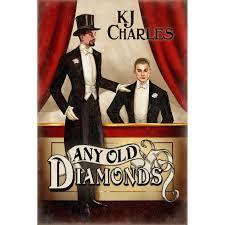 A Romance Novel by KJ Charles.

Lord Alexander Pyne-ffoulkes, the Duke of Ilvar's younger son, detests his father and step-mother. Therefore, he hires a pair of jewel thieves to steal a priceless diamond arrangement his father intends to gift to his step-mother for their anniversary.

As the Duke's castle is a difficult target, Alec has to pretend that one of the thieves, the famous Lilywhite Boys, Jerry Crozier, is a gentleman of standing and even more importantly: Alec's best friend.

Quickly, sparks fly between Alec and Jerry, but betrayals are part of the business and the situation is tense...

Has a sequel in Gilded Cage.

Tropes in this book