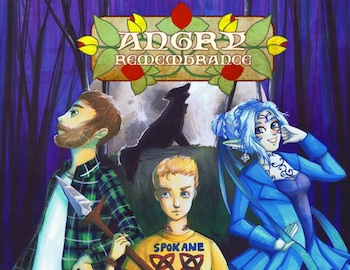 I used to hate my father. Then I learned he was a legend.
Angry Remembrance

is a coming of age web serial with an urban fantasy bent. Brian Cargill learns that the father he thought walked out on his family actually died a hero—fighting an ancient battle between two warring factions of shapeshifters who call upon the powers of legendary heroes and their nemeses. Brian's drafted into the war firmly on the hero side by his dead father's close friend and former trainee, Moon-Singer, a man who quickly begins to see himself as fulfilling the same role for Brian. Needless to say, Brian isn't exactly happy to be asked to give up his friends and normal life to fight legendary battles as a werewolf, especially because everyone is expecting him to live up to his father's tall reputation. but when he learns that the alternative is being killed or drafted into the Vandals, shapeshifters who are intent on causing the apocalypse, he reluctantly signs on to the fight. Helping ease the transition is his best friend, Wren, who turns out to have been hiding a secret of her own—she's a piskie, one of the faeries. With the emotional support of Wren, Brian slowly tries to unravel the mystery of his father's death while he does his best to survive the shapeshifters epic battle...