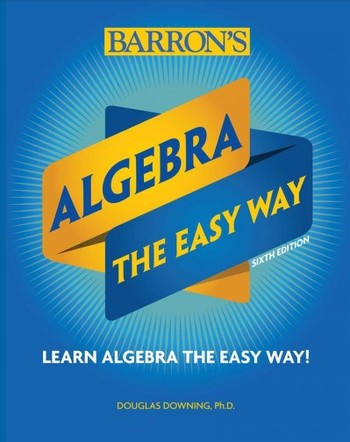 This book tells of adventures that took place in the land of Carmorra. The story is told here because, by following these adventures, you can learn differential and integral calculus.
— The Introduction to Calculus the Easy Way

Algebra the Easy Way (1983), Trigonometry the Easy Way (1984) and Calculus the Easy Way (1982) are three supplementary textbooks intended to complement a full course of algebra, trigonometry or calculus, respectively. They are intended for students who are having difficulty understanding where the concepts are coming from, but are otherwise motivated enough to get help from an outside source. The books covered by this article were written by Douglas Downing, Ph.D., were illustrated by Susan Detrich, and are available from Barron's Publishing.

What are these books doing on this site, then? Well, as the above quote suggests, the textbooks are written in the format of adventure novels, where the main characters essentially have to derive algebra (or trigonometry, or calculus) from first principles in order to prevent the Big Bad from taking over the kingdom. Although this probably sounds unbearably corny for a mathematics textbook, it ends up being an excellent pedagogical tool. Instead of simply seeing a new definition at the beginning of a section, then examples, then homework problems, the concepts are introduced in the context of problems where they are needed. Our heroes come across a problem, derive the mathematics it takes to solve the problem, and then flesh out these concepts so they can be ready in case they're attacked again. Even when the context is simply "I challenge you to solve this problem," the new concepts are shown to follow from previous ones in a more-or-less understandable manner.

The series chronology is Algebra the Easy Way, then Trigonometry the Easy Way and finally Calculus the Easy Way. Regarding story, there isn't much referenced from one book to the next, so people who want help with trigonometry but didn't need help with algebra will still get something out of the trig book without reading the algebra book.

Note that Barron's Publishing has other subjects covered in its "_______ the Easy Way" series. However, these other subjects are not told in the form of an adventure novel, and are instead standard supplementary textbooks — not even Statistics the Easy Way or Math the Easy Way.

The main characters of the series are