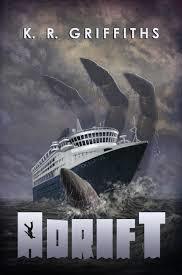 The Adrift series is a horror trilogy written by K.R. Griffiths, focused on an ancient conflict between humans and ancient creatures.

Newlyweds Dan and Elaine Bellamy have booked the honeymoon of a lifetime, boarding the world's largest luxury cruise liner for its maiden voyage. After struggling with his Agoraphobia for two years, Dan is looking forward to celebrating his progress and the beginning of their new life together. But the honeymoon takes a bizarre and terrifying turn, when he witnesses someone throwing a body overboard.

With 3000 souls on board, the Oceanus becomes the target of an ancient evil.

The first novel provides examples of:

The second novel provides examples of:

The third novel provides examples of: