Literature / Across the Universe 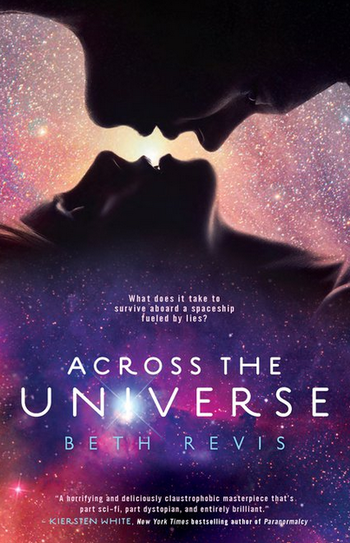 Across the Universe is a trilogy of sci-fi books by Beth Revis, set on a Generation Ship making a slow sublight journey to a planet to set up a colony. The future colonists are kept in cryogenic pods, while generation after generation of shippers keep the Godspeed functioning.
Advertisement:

Amy, the teenage daughter of two essential personnel, is abruptly woken up while the ship is still en route when her cryogenic pod is unplugged — someone tried to murder her. Amy tries to adapt to the strange dystopian society aboard Godspeed and track down the attempted murderer before he can do the same to any of the other colonists.

The story alternates between her perspective and that of Elder, the future leader-in-training of Godspeed. He believes that the current leader, Eldest, is keeping secrets about the ship and its journey from them, and is determined to uncover them. He also has a crush on Amy, who is utterly unlike any of the other women on the ship.