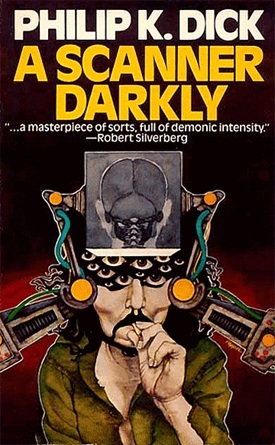 This has been a novel about some people who were punished entirely too much for what they did. They wanted to have a good time, but they were like children playing in the street; they could see one after another of them being killed - run over, maimed, destroyed - but they continued to play anyhow. We really all were very happy for a while, sitting around not toiling but just bullshitting and playing, but it was for such a terrible brief time, and then the punishment was beyond belief: even when we could see it, we could not believe it...
— A Scanner Darkly, afterword, Philip K. Dick
Advertisement:

A classic 1977 darkly comic dystopian Science Fiction novel by Philip K. Dick. Dick dedicated the book to numerous people he personally knew that died, became insane or irreversibly ruined their health because of drugs. Among that list he placed himself, as his own early 70's drug use had destroyed his pancreas and eventually caused his premature death in 1982.

Bob Arctor, the protagonist, is an undercover narc in the war on Substance D, a drug which gradually destroys a person's ability to think or perceive reality. Substance D deteriorates a person's mind, until they are obsessed only with the drug, and endanger themselves and others going after it. It seems to be made in only one place, but the narcs just can't seem to find that place or stop the flow.

When Arctor appears in public, doing anti-drug talks or comparing notes with other narcs, he wears a special suit that hides his features completely by changing how he looks every second and removes the affect from his voice. His supervisor and colleagues simply know him as "Fred". This is supposed to be to protect the narcs from internal corruption; not knowing what your fellow undercover agents look like makes it much harder for a crooked cop to sell out to the cartels.

Bob only wears this suit when he's in straight society. In the world he's infiltrating, a world of poverty and crime, he uses no disguise. As Bob, he blends in well, fitting in more with the people he scopes out than with the straights. He even uses Substance D, the better to blend in. The narcs are aiming for the big dealers, and they hope that Arctor will lead them to the people they're hunting for by hanging out with the small fish.

But Arctor's drug use is starting to impair his thinking. His current case, strongly suspected of being a major Substance D dealer, slips out of his grasp by entering a rehab center. The rehab centers give the people who enter completely fresh starts, and our protagonist's attempt to get confidential info from the one that suspect entered simply wrecks the chance of his using it again, either for info or for rehab.

So Bob talks, in disguise as "Fred", with his superior, also in disguise, to get his next case. The boss seems understanding about his losing his quarry. So they discuss all the Substance D users in the neighborhood; this requires him to talk about "Arctor" as if he were someone else, since doing otherwise would make it clear who he was and make him a direct target for corrupt cops. His boss determines that the "Arctor" he reports on is behaving suspiciously and getting large amounts of money at irregular intervals; it's actually reward money from Bob's successful tips, but, not knowing "Arctor" is a narc, the boss thinks he might be a dealer... and so "Fred" is given the assignment of spying on himself. Which doesn't make things easier on his drug-addled brain.

In 2006, it was adapted into a movie by Richard Linklater, starring Keanu Reeves, Woody Harrelson, Robert Downey Jr., and Winona Ryder. Neither a traditional live-action nor animated feature, the movie was recorded on digital video and then rotoscoped to create a graphic novel-like visual effect, in a similar style to Linklater's earlier film Waking Life. Both versions of the story are well-loved, although some significant elements of the film are different from the novel.

The Film of the Book also provides examples of: