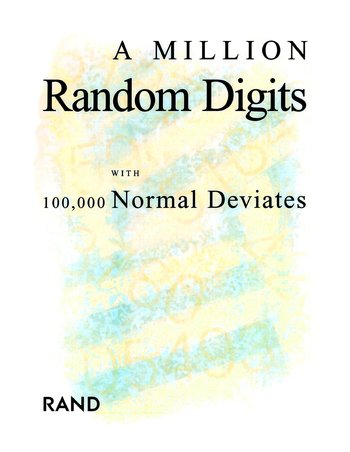 "I can't really put my finger on it, but by about the halfway mark, I started to lose interest. Best I can come up with, is that the storyline, the plot, lacked cohesiveness. The narrative was a tad bit... random in spots. And maybe a bit over-long."
— Patrick Murray, "story lacked cohesiveness, but I've read worse.

Outside of a cover and a foreword, that is it. The book was first published in 1955 to be used whenever someone needed to pull out a random number. Despite a re-issue in 2001, the book has been rendered largely obsolete by computers that can run random number generators. Still, computers did allow people to order it from the Internet and even give it reviews, leading to a variety of sarcastically mathematical reviews on Amazon

. The reviews were interesting enough to warrant a mention in two different New York Times articles, "The Reviewing Stand

All that aside, how in the world does a list of random numbers demonstrate Tropes? If Tropes are "storytelling shorthand," how can they be demonstrated by something that is only a story by the most absurdly wide of definitions? The answer to that comes from the fact that even if something is a tale only by the widest of definitions, even that almost-tale falls under a law of Tropes: there is no such thing as The Tropeless Tale. Need proof?

A Million Random Digits With 100,000 Normal Deviates provides examples of: