Literature / A Kiss Before Dying 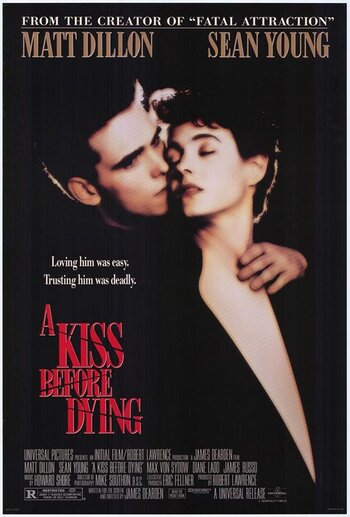 A Kiss Before Dying is a 1953 novel written by Ira Levin. The book is about a young man named Bud Corliss who meets Dorothy Kingship, the daughter of a wealthy copper tycoon. Once she finds out she's pregnant with his child, Bud kills Dorothy and makes it look like a suicide. He then hooks up with Dorothy's sister Ellen. When Ellen finds out that he murdered Dorothy, Bud kills Ellen. He then dates the last of the sisters, Marion. Bud's deception is eventually revealed and falls to his death into a vat of molten copper.

There have been two film adaptations. The first, made in 1956 and directed by Gerd Oswald, stars Robert Wagner as Bud, Virginia Leith as Ellen, and Joanne Woodward as Dorothy. This version eliminates the third sister Marion.

The second, made in 1991 and directed by James Dearden, is completely different, though it eliminates the third sister as well. Matt Dillon plays Jonathan Corliss, while Sean Young plays twins Ellen and Dorothy Carlsson. In this version, Dorothy is killed by Jonathan during the first few minutes of the film, and at the end, Jonathan is run over by a train after Ellen learns the truth.

Tropes in these works: