Literature / A Hippie in the House of Mouse 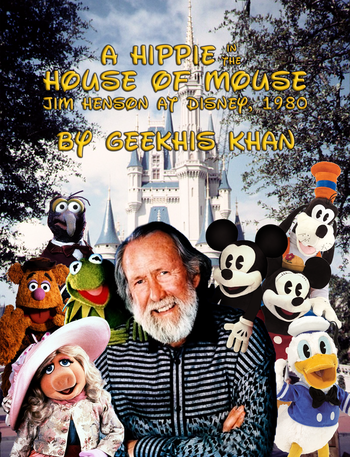 I felt like I'd just handed Don Quixote his spurs, or Captain Ahab his harpoon. And I thought to myself "Bernie, you putz, you're in it now." And with that I consigned myself to weeks of pouring through accounting books, consulting lawyers, calling in favors, twisting nuts, and setting up Hollywood lunches. All to answer the simple question: "how does a frog swallow a mouse a hundred times his size?"
—Bernie Brillstein, Where Did I Go Right?note In-Universe book, naturally
Advertisement:

Most people who know about Jim Henson are aware of the fact that, towards the end of his life, he had made an attempt in the late Eighties to get Disney to purchase The Muppetsnote barring Sesame Street in order to have more freedom to pursue his own projects. At the same time, he was struggling with projects that either underperformed or flopped outright, before ultimately dying in 1990 from a disease that he was too busy to properly notice. But what if he decided to get his foot in the door earlier?

In late July, 1979, Jim Henson was struggling to get The Dark Crystal off the ground, with no film studio having any desirable interest in picking up the decidedly un-Kermit-like pitch. At the same time, Disney was struggling to remain afloat, with the death of Walt Disney just over a decade prior effectively making the company a chicken with the head cut off: flailing around with no clear direction. And had it not been for a wayward thought crossing Jim's mind while having drinks with his manager, these paths wouldn't cross for several more years.

But as you can imagine, that's not how this story goes...

is a thread and timeline on AlternateHistory.com by Geekhis Khan, with the Point of Divergence occuring in late 1979, when Jim Henson and his business manager Bernie Brillstein raise sufficient money to buy roughly 10% of Disney common stock, gaining seats on the Board of Directors for Jim himself and his legal advisor Al Gottesman. The changes from reality pile up from there.

This timeline features the following tropes: